徜境 SHOKYO -Chernobyl in Fukushima- I'm looking for someone to handing out DM!

I am presenting a photo exhibition of Chernobyl in Fukushima starting on Saturday March 21, 2015. I'm looking for people who can pass out the photo exhibition's DM abroad. (such as cafes and galleries that will let me place a stack)
I'll give away copies to hand out. If you have people in mind, please email me!
satian39★gmail.com（★→@）
I'm also looking for assistance in Japan.
Thank you! 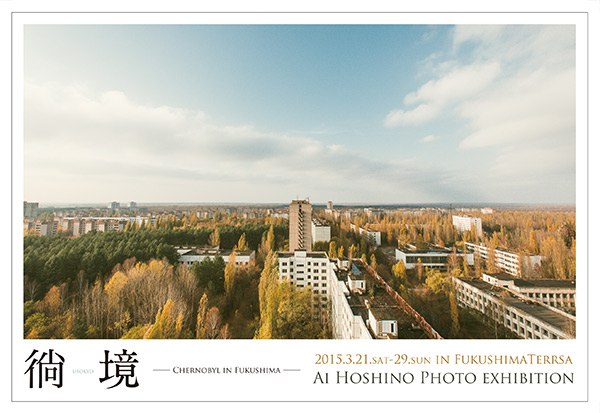 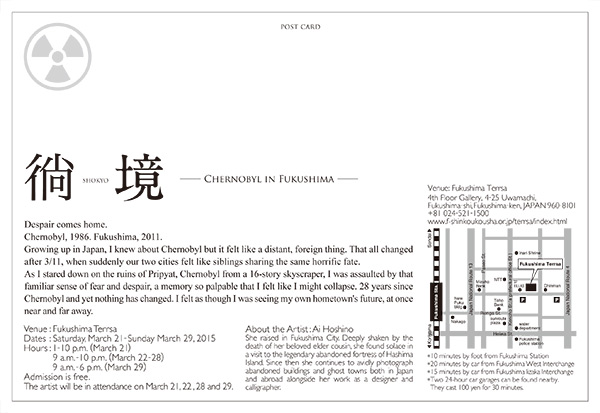 Growing up in Japan, I knew about Chernobyl but it felt like a distant, foreign thing. That all changed after 3/11, when suddenly our two cities felt like siblings sharing the same horrific fate.

As I stared down on the ruins of Pripyat, Chernobyl from a 16-story skyscraper, I was assaulted by that familiar sense of fear and despair, a memory so palpable that I felt like I might collapse. 28 years since Chernobyl and yet nothing has changed. I felt as though I was seeing my own hometown's future, at once near and far away.

Ai Hoshino was raised in Fukushima City. Deeply shaken by the death of her beloved elder cousin, she found solace in a visit to the legendary abandoned fortress of Hashima Island. Since then she continues to avidly photograph abandoned buildings and ghost towns both in Japan and abroad alongside her work as a designer and calligrapher.